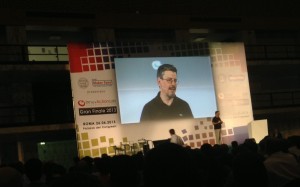 Leevia, a crowdfunding platform for companies to support charity projects, won InnovActionLab 2013, a learning by doing startup initiative ideated by Italian entrepreneur and vc Augusto Coppola (on stage in the photo).

More than 900 people (among them 100 investors and 40 vc funds) participated in the final, which took place yesterday at Palazzo dei Congressi in Rome.

The project led by Diego Durante, Francesco Mancino and Piero Borgo was choosen among eight competitors by a jury of investors, entrepreneurs, journalists and experts.

The runner up was Wallet Saver, an app that allows people to discover the best smartphone plans based on their personal use of the device. The project was led by Giacomo Putignano, Leonardo Quattrucci, Paolo Scarabaggio and Matteo Nardone.

Federico De Simone, Giulio Galassi, Arianna Notari and Dario De Angelis got the third place with Makoo, a platform that allows users to create customized jewels based on their recorded vocal messages.

InnovAction Lab is a free initiative that aims to help university students and young people acquire knowledge to understand the market potential of innovative projects and how to present them effectively to venture capital funds. To date, it has  started 25 companies financed by venture capitalists and angels.