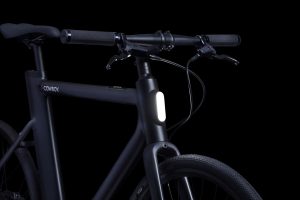 The round was led by Tiger Global with participation from Index Ventures and Hardware Club.

The company intends to use the funds to scale operations and to roll out the products into Germany, U.K., the Netherlands and France.

Co-founded by Adrien Roose, Karim Slaoui, and Tanguy Goretti, Cowboy is an electric bicycle maker which features an intelligent motor-assistance system with built-in sensor technology, measuring speed and torque. The technology adjusts intuitively to pedaling style and force, delivering an added boost of motor-assisted speed at key moments. A battery gives riders the freedom to roam for 50km, and takes just 2.5 hours to fully charge.
The company’s mobile app features live dashboard, navigation, GPS tracking and ride stats.
The bike and battery together weigh in at 16 kg.

The company began offering its products in its home market in April 2018 and hit the €1m milestone in just four months.