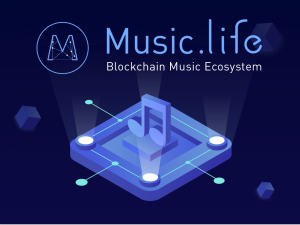 The round was led by Metropolis VC.

The company intends to use the funds to continue building its music exchange.

Led by Dr. Kaiming Liu, founder and chairman, MusicLife is a blockchain music exchange ecosystem that allows fans to own “stocks” of songs and purchase music. Every shareholder can earn dividends directly from their song shares. The company is also launching a model that lets users mine cryptocurrency by listening to songs on musical wearables.
Since launching this June, over 600,000 people have signed up on the MusicLife exchange, which has over 30 million users in its ecosystem.

Music holders (artists or record companies) can license their copyrighted music to the platform where it will be free to listen to until it hits 50,000 plays. Once a song reaches this threshold, an AI-powered mechanism will set a price for it based off frequency of plays and create a MusicToken.
MusicTokens represent the property rights of songs and are split into multiple shares. Music holders will own 95 % of shares and MusicLife will own five percent of shares.

Fans will have the opportunity to purchase up to 45 % of existing shares from music holders. While paying for music, they can get song shares in the equivalent amount of the song’s listening price, which will remain at a low rate of around one dollar. In addition to paying to listen to songs, users can purchase and exchange shares of songs with MitCoin (MITC) on the music exchange directly. As songs increase in popularity, MusicToken shareholders earn MITC dividends.

MusicLife also allows other software platform to embed their music libraries for free via an SDK. Software linked to MusicLife will share in the profits generated by users purchasing music.
The first software embedded is the app echo Music, which provides innovative music services and has 30 million users worldwide.

MusicLife has also developed a model which lets users mine cryptocurrency by listening to song on connected musical hardware. Musical wearables can connect to MusicLife through an SDK which allows the hardware to collect listening data and establishes MusicLife’s song prices. In exchange for their listening data, users who opt in will earn MITC directly, effectively mining cryptocurrency by listening to music.
The audio glasses, MusicLens™ will be the first piece of hardware to connect to MusicLife’s ecosystem.

MusicLens™ are glasses that use bone-conduction technology to play music without headphones. They also have sensors which can verify that a human is listening to a song, allowing MusicLife to set song prices in their ecosystem.
MusicLens™ will be in mass production in late 2018.