RentStuff.com, a Nashville-based company that operates a community marketplace for rental goods, has raised $660k in its first seed round funding.

The round was led by Solidus Company, with participation from Chattanooga Renaissance Fund and a small group of angel investors.

The company intends to use new funds to hire additional engineers, grow the rental platform, and expand into new cities (such as New York, Chicago, Los Angeles, and San Francisco). Led by CEO Christopher Jaeger, RentStuff.com plans to open an office in downtown Chicago, in May.

A 2011 graduate of the Jumpstart Foundry, a TechStars Affiliate Accelerator Program, the website officially launched in August 2011 in Nashville and opened its platform to the wider US market in early January 2012, having concluded five months of limited beta testing.
RentStuff.com allows users to rent items to and from others nearby. Users can also post items for others to rent or search for items they want to rent in a given area. The site handles payments, security deposits, and rental agreements. 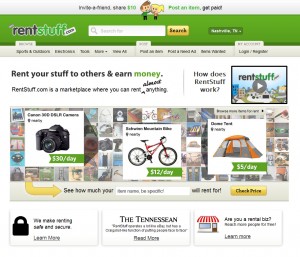