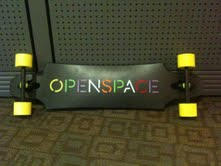 Foundry Group said it had made a seed investment in Openspace, a marketplace for buying apps, music, books and movies for smart phones, tablets and desktops.
According to a post on Foundry Group post, the transaction closed in October 2010.
Managed by the Boulder, CO-based Developers Cooperative, founded by Robert Reich and Randy Watler, Openspace is an app store, which is built on an open community model.
Its first version focuses on, but is not limited, to HTML5, considered the real competitor to the main mobile, tablet and desktop app stores.
FinSMEs
18/04/2011