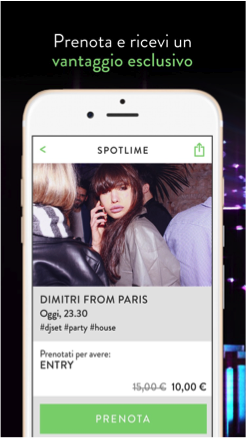 Spotlime, a Milan, Italy-based provider of an event discovery and booking app, raised over €800k in funding.

A group of unnamed busines angels participated backed the company, which has now raised €1m since founding.

Led by Francesco Rieppi and Francesco De Liva, Spotlime provides a newly released Android and iOS app that allows people to discover, book as well as get free access to selected events including concerts, discos, restaurants, etc., both in Rome and Milan.
The company, which also has announced the launch in Florence, will use the funds to continue to expand operations into other cities nationwide and hire new people to add to its current team of 10.

The app is currently used by 100k people.