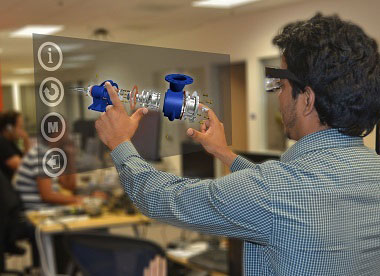 Following the announcement of its interactive AiR™ Glasses and the collaboration-centric AiR™ Enterprise Suite, the acquisition will give Atheer customers an enhanced ability to use natural gestures on the Atheer AiR™ smart glasses platform. Combining ONtheGO’s technology with Atheer’s gesture, voice and motion tracking-based interactive platform will enrich the way people interact with mobile devices.
ONtheGO adds 3 issued and 6 pending patents to Atheer’s IP portfolio of gesture interaction and rich visuality technologies, bringing the total to 14 issued patents and nearly 50 additional pending patents.

Founded in 2012 and based in Portland, Oregon, ONtheGO uses computer vision and proprietary algorithms to provides Ari™, gesture recognition software that turns any mobile device with a standard camera into a gesture interface.
Led by CEO Ryan Fink, now VP of Market Development at Atheer, the company has received investments from Brad Feld through his FG Angel Seed Fund and Paul Kedrosky through SK Ventures. All of ONtheGO Platforms’ employees will be joining the Atheer staff and will continue to operate from Portland.

Led by Alberto Torres, CEO, Atheer is the pioneer of AiR™ (Augmented interactive Reality) computing, which is designed to enhance the productivity and safety of deskless professionals at Fortune 1000 companies. The platform combines augmented reality with intelligent gesture, voice and head-motion interactions as well as real-time rich-media collaboration, all on a mobile smart glasses platform.
The company is backed by Bobby Yazdani, Co-Founder of Saba Software, and Farzad Naimi, Co-Founder & Managing Partner, RONA Holdings.