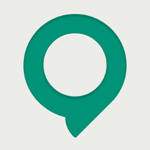 Founded by Ari Steinberg (a Facebooker), the company has now a four person team including Shahaf Abileah and Roger Tan, two software engineers, and Dana Vogt, a designer. It will use the funds to hire additional software engineers.