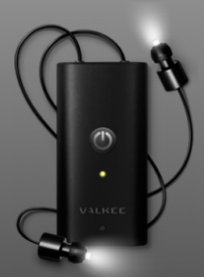 Valkee, an Oulu, Finland-based developer of a brain stimulation headset designed to improve the human mind and performance, raised €7.4m (approximately $9.7m) in Series A funding.

Investors include both current and new shareholders. Backers in the seed round of December 2010 included Esther Dyson, Anssi Vanjoki, Jyri Engestrom and Lifeline Ventures (read here our news of December 2010)

The company intends to use the funds to expand its market areas, reseller network and use cases. It currently has clinical trials ongoing in the areas of jet lag, cognitive performance and different depression types.

Founded in 2007 and led by Pekka Somerto, CEO, Valkee has developed a pocket-sized light therapy device that channels bright light via the ear canals into the brain. A daily 12-minute dose is studied to have beneficial effects on mood and wellbeing as reported by University of Oulu, Finland, according to its research program since 2008.
The product was launched in 2010 in Europe under the CE Class II medical device certification.