Flingo, a San Francisco, CA-based publisher of Smart TV apps that enables web or mobile videos to stream directly to TVs, has raised $7m in Series A funding from August Capital.

In conjunction with the funding, August Capital ‘s David Marquardt, and Howard Hartenbaum, a founding investor in Skype, will join Flingo’s board of directors.

The company intends to use the funding to expand its device presence as well as its automatic content recognition (ACR) infrastructure, which identifies broadcast network programs around the world in real-time. Once identified, Flingo’s SyncApps technology brings contextually relevant content directly to the viewer’s TV, laptop, tablet or smart phone.
The company recently added Twitter and Facebook sharing buttons to its Social TV framework (See the screenshot below). 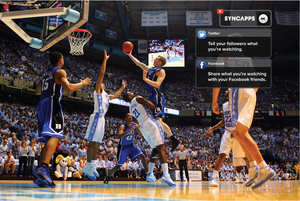