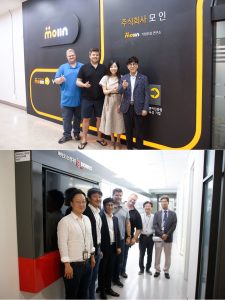 It will be led by Mr. Jae Yoon Ok, CEO of Moiin and Oasis City, Inc, who was joined by advisors:
– Mr. Eric Schiermeyer, former CTO of Myspace and co-founder of mobile gaming giant Zynga,
– Mr. Jason Brink, winner of the 2014 GDN/Bill and Melinda Gates Foundation prize for his ecosystem proposals to solve problems endemic to foreign aid, and
– Mrs. Haley Kim.

Moiin is a VR hardware company which is leading the construction of Oasis City, the world’s first fully immersive VR ecosystem. Its first mass consumer product, the FBG suits and gloves, will be available for sale in 2020.

Mr. Jae Yoon Ok is a VR pioneer with over a decade of experience building immersive VR equipment.