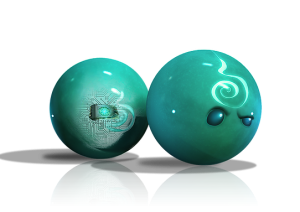 WRLDS, a Stockholm, Sweden-based company that develops smart toys and platforms for connected play, completed a $600k seed funding round.

Co-founded by Felix von Heland, inventor of a storytelling app called Storimi; and Christian von Heland, who sold 20 million Moon Foam balls through his company Waboba, WRLDS is a smart toy company that engages teens and tweens in active play by bridging the gap between the two “wrlds” of mobile gaming and outdoor play.
The company also announced the release of a new augmented reality (AR) and bluetooth-enabled smart ball and platform. The ball is made of a lightweight, bouncy material and has a built-in chip to control mobile games, giving “tween” players new ways to engage in active, outdoor play.
The first ball depicts a character called “the Water Soul”, who will later be joined by the Fire, Earth and Wind souls. These characters will have different physical features and different in-game personalities, strong, wise, vicious and empathic. Together they are WRLDS’ first family of “Ancient Souls” and are all limited editions. As worlds evolves, new characters and families will be added.
The new smart ball, about the size and weight of a tennis ball, will be available for purchase for $39.99 on the WRLDS website in September 2018.