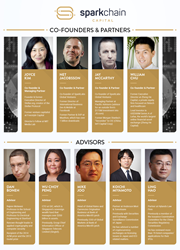 Led by Joyce Kim, founder and former Executive Director at Stellar.org and venture capitalist at Freestyle Capital, SparkChain Capital focuses on innovations in blockchain and cryptocurrencies, leveraging SparkLabs Group’s extensive network in Asia, with a small targeted holding of actual cryptocurrencies, which the fund will not actively trade. SparkChain Capital is also planning for an ICO later this year.

Through its accelerator in Seoul, SparkLabs already has investments in Blocko, an enterprise blockchain company in South Korea, and Sentbe, a bitcoin remittance company in South Korea (2015). Through SparkLabs Global (global seed fund), the team invested in Cryex, an early blockchain compatible FX trading, clearing and settlement system based in Stockholm (2014), and other related startups.

Joyce Kim will be working with:

The fund is supported by an advisory board including experts from the cryptocurrency and finance sectors, including: