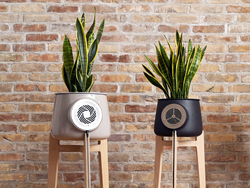 Clairy, a Pordenone, Italy-based smart flowerpot that uses real plants to fight against indoor pollution, received a €2M grant from the European Union.

The funds will be used mainly for research and development and to hire talent.

Created by Italians Paolo Ganis, Alessio D’Andrea and Vincenzo Vitiello, Clairy has developed a smart flowerpot that uses real plants to fight against indoor pollution. The flowerpot leverages a technology unit with sensors that measure indoor pollution, and is connected to smartphones to communicate real-time data.
The team raised over $370k via Kickstarter and Indiegogo, and after a three-month period in Silicon Valley with one of the biggest accelerators in the US, Plug and Play ventures, went back to Italy since the product is handmade in Venetian Ceramic.

The company plans to launch a new Kickstarter crowdfunding campaign by the end of March 2018.