Guys, FinSMEs is in the list again….For the second time in a row (first time here), it has been named as one of the 100 Best Websites For Entrepreneurs by Forbes. 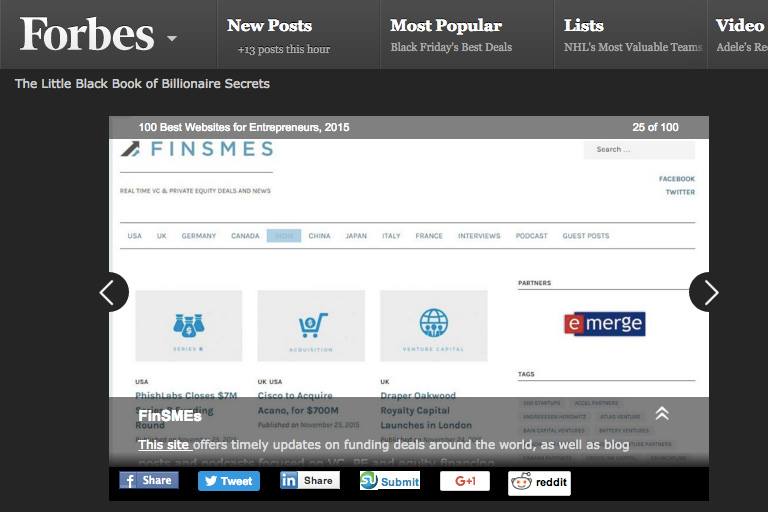 This acknowledges the enormous effort made to keep you up-to-dated about what happens in the the world of startup and growth business funding arena.
Following the launch in August 2009, the newsblog soon attracted a global audience of warm readers and avid “users”. Yes…as I like to say, FinSMEs is both “read” and “used”.
Read by entrepreneurs, investors, journalists and bloggers, used by market analysts, big data scientists, professional at financial organizations, as well as university students, FinSMEs has become a “must-check” resource for people interested in VC and PE stuff around the world.

Personally speaking, running FinSMEs has been an enormous privilege. It has always represented an extraordinary observatory to see what happens in private markets. We have seen massive tech waves rising taller than skyscrapers, sometimes crashing hard on rocks. From mobile apps to social networks, crowdfunding, messaging, glasses, IoT, wearables, SaaS, cloud computing, IT intratructure, transports, fintech, etc., the path to innovation and the construction and consolidation of sustainable tech ecosystems require massive injections of capital and time. Tell you what daily happens is what we have done since 2009 (remember the first blogspot?) and what we want to continue to do. Better, of course, but with the usual energy and passion. We also want to continue to grow. In the fast-changing news industry landscape, some new exciting initiatives are in development…

People are a critical resource for any achievement. To this end, I want to thank my life partner Michela Rocci for having always supported me in making this effort. In addition, I also want to thank those who have believed in FinSMEs: Laurent Drion and Patrice Decafmeyer, partners at e-Merge, one of the best micro vc firms in the world; Tobia De Angelis, analyst at LVenture Group, who has made his knowledge and passion available to the podcast inititative; and all of you guys who in some way advised and contributed to help the site grow.