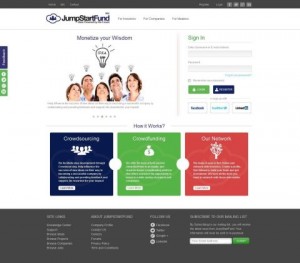 JumpStartFund.com solicits new business ideas and patents from individuals, federal research labs, universities and other R&D organizations and asks for feedback, collaboration and both equity- and rewards-based crowdfunding from its members to help create viable companies.
The crowd can also vote, comment, refine and impact ideas in development.

Submitted ideas and patents are evaluated for marketability by both community members and the company’s team. Following the selection, they move into a “work in progress” state where members can participate in market research, vote on a number of issues (such as design, naming, manufacturing, marketing, etc.), propose additional ways of using them, and try to turn them into viable companies. Members are rewarded with advisory points that equal a commission on the company’s revenue for the first year.
To maintain the commission over time, members must stay actively involved in at least 50% of the crowdsourced activities related to that company, creating social capital for it.

Led by Dirk Ahlborn, CEO and co-founder, JumpStartFund is built as an interactive social network where members can create their profile, follow and network with investors and other startups to fundraise (using rewards- or equity-based crowdfunding once the latest SEC regulations are in effect). The platform also features a “Jobs” section.