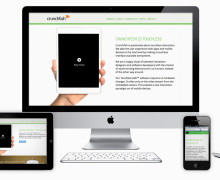 The round was led by the two main owners in the company, Sheikh Mohammed Al Amoudi and Chairman Joachim Samuelsson, which committed SEK12,3m, with participation from existing investor Intesa AB, which injected SEK1,7m, as well as two new investors Stephan Carlquist and Anders Williamsson, which invested SEK6m.

The company intends to use the capital to accelerate the roll-out of its technology.

Founded in 2010 and led by CEO Joakim Nydemark, Crunchfish provides a touchless interaction technology designed to take the user experience with apps and mobile devices to the next level allowing a more natural interaction, which is enabled by a patent pending object tracking that can understand depth using only a single camera and that functions even in dim light conditions.