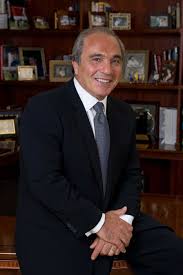 The deal reportedly amounted to over $180m.

Commisso is the Chairman and CEO of Mediacom Communications Corporation, a company he founded in 1995 to acquire and reinvigorate cable systems in underserved communities across the United States.

In 2000, he directed an initial public offering for Mediacom, paving the way for the company’s dramatic growth into America’s 5th largest cable television provider, with over 4,500 employees serving nearly 1.4 million customers in 22 states.

He took the company private in 2011, and now Mediacom, with annual revenues of nearly $2 billion, is wholly-owned by Commisso and his family.

In January 2017, he purchased a majority ownership stake in the New York Cosmos and became the club’s Chairman. The Cosmos are the most recognized American soccer brand in the world. Since beginning play at Yankee Stadium in 1971, the iconic club has won a record total of eight professional soccer championships and brought some of the biggest stars in international soccer to the USA including Pelé, Franz Beckenbauer, Giorgio Chinaglia, Carlos Alberto, Johan Neeskens and more recently, Raúl and Marcos Senna.