Home » European logistics: why the sector is continuing to do well 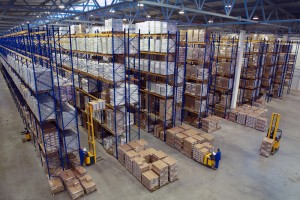 At the moment, neither the term “Europe” nor the term “logistics” are automatically associated with high levels of success. With the Eurozone facing significant political and currency-related problems and the logistics sector under pressure from competition, rising premises costs and much more, some believe that it’s an industry in decline.

However, the evidence actually shows the opposite. Unlike some other sectors that are showing significantly sluggish performance, this industry has defied both expectations for its own sector as well as its geographical area. The warehouse vacancy rate in Europe in the final quarter of 2017 was remarkably low at just 5%, and that figure is going down. In addition, warehouse take-up levels rose by well over 10% in the same period – and there was over 20 million square metres of warehouse space occupied in Europe.

The main reason why the European logistics sector continues to perform well, of course, is economic. Europe is full of well-connected cities, which means that there are lots of consumers readily available – and this cuts costs for logistics providers because their transportation obligations are smaller.

When it comes to logistics, this is in many ways just as important for a place as having an airport or other transport access to global industry might be. As a result, European cities such as Stuttgart and Antwerp often count logistics as a substantial part of their local economies – despite not being the most major of global cities.

European labour markets, meanwhile, are also well suited to logistical work. In Rhine-Ruhr in Germany, for example, workers with the skills required to efficiently process and manage movements of items exist in large numbers.

With strong logistics labour markets starting to appear in emerging economies such as Poland, the logistics sector in Europe appeals even further because there’s clearly no shortage of relevant labour – and the competition also drives down prices.

Europe as a hub

However, these factors alone aren’t the only reason for Europe’s continued success as a logistics powerhouse. Europe has long been seen as a hub for the rest of the world, and that influences global business decision-makers. The continent is located within convenient distances of two important nodes in the global economy, North America and the Middle East. This has also been backed up by investment in infrastructure. Frankfurt Airport in Germany, for example, is now considered a “super-hub” airport by many thanks to its high capacity, and as a result, it is a frequently chosen destination for many cargo flights.

Europe is also a hub for shipping, as entrepreneur Evangelos Marinakis has discovered. As recently as 2013, for example, the EU’s shipping sector was believed to have sent €56bn to the EU’s gross domestic product while also providing hundreds of thousands of jobs.

Europe is also a cultural hub in many ways, which is important for businesses thinking about the practical aspect of their logistical processes. The lingua franca of many businesses, English, is spoken to some extent by many Europeans, while the world’s second most widely spoken language after Mandarin – Spanish – gives Southern Europe an important appeal. As a result of these factors, it has often made sense for many global companies to site some aspect of their logistical operations here.

Looking to the future

The European logistics sector is clearly buoyant at the moment. However, there are some potential problems on the horizon. A recent report from the US-based property consultancy firm Jones Lang LaSalle noted that rising rents and the lack of appropriate and affordable land for the construction of warehouses – both major worries for those involved in the logistics sector – may have an impact on the industry’s performance.

As the authors of the report put it: “Although the European aggregate vacancy rate is now below the 5% mark, new speculative supply delivered to the market is expected to slow down in 2018 due, in part, to a scarcity of development land in many markets.

“Landlord-favourable conditions remain in the majority of European markets with rents expected to rise more significantly throughout 2018.”

It’s also unclear what impact Brexit will have on the sector, especially given that major UK airports such as London Heathrow play important roles in the European logistics ecosystem. However, with the final Brexit arrangements not yet in place, it’s too early to tell what Britain’s future relationship with the bloc will be – and how that might affect Europe-wide logistics.

AI Became the Front-Runner of Fintech – What Should People Expect?