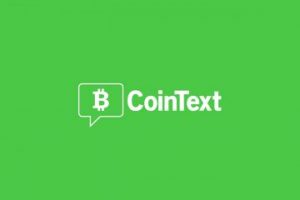 CoinText, a Nashua, NH-based service to transact cryptocurrency with any type of mobile phone over text messages without the need for Internet, closed a round of $600k in Bitcoin Cash (BCH) seed funding.

The round was led by Yeoman’s Capital

Led by President and CTO Vin Armani, CoinText.io which enables users to send Bitcoin Cash (BCH) to phone numbers or BCH addresses without Internet by providing an SMS gateway to communicate with the blockchain. Users may also retrieve their CoinText private key as a backup to access their wallet using other platforms.
CoinText launched its English-language beta in March 2018 and is currently active in eight countries; United States, Canada, United Kingdom, Australia, South Africa, Netherlands, Sweden and Switzerland.

The company will use the funds to scale globally with plans to launch in at least fifty-four countries over the next twelve months.