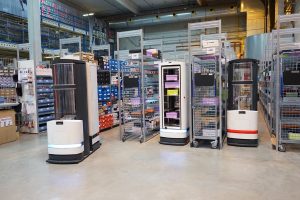 The round was led by the Körber Group with participation from Cellcom, Zalando and Fiege Logistics.

The company intends to use the funds to continue its robotics development as well as expand its sales and distribution network both in Germany and internationally.

Founded in 2014 by Frederik Brantner, Lukas Zanger and Nikolas Engelhard, Magazino develops and builds perception-driven, mobile robots that automate the handling and transport of goods within intralogistics.
The company’s mobile order picking robot TORU enables the picking and handling of individual objects, such as shoe boxes. Using 3D camera technology and numerous sensors, the robots can localize, identify and securely grasp objects on shelves, store and deliver them to the desired destination.
The new robot, SOTO, works similar to TORU but is designed for much larger and heavier objects.

Through the financing, the investors secure access to Magazino’s technology including the software stack ACROS (Advanced Cooperative Robot Operation System), which forms the “brain” of the robot and is designed to allow non-deterministic, perception-driven robots to operate in environments that were originally made for humans.

The startup currently has over 80 employees.

By FinSMEs Published on May 26, 2014
fundingGermanyventure capital

By FinSMEs Published on October 18, 2012
Germany