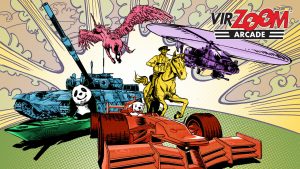 The company will use the funds to expand into commercial VR Fitness applications with second-generation products.