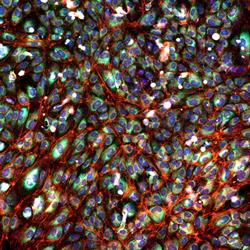 The company intends to use the funds to continue its work in drug repurposing, including partnerships with multiple major pharmaceutical companies, while also building out its own internal pipeline of new drugs and expanding into new therapeutic areas and discovery partnerships.

Led by Chris Gibson, Co-Founder and CEO, Recursion combines innovative biological science with artificial intelligence to discover new therapeutics at scale. By modeling thousands of diseases in human cells and capturing hundreds of millions of microscopic images, the company is building a large biological image dataset, currently growing by more than 2 million new images and 20 TB of data each week. This annotated dataset enables the company to train neural networks and use other computational techniques to identify changes in thousands of cellular and subcellular features in the presence of various biological perturbations.
This approach, called ‘Phenomics’, enables discovery of novel biology, drug targets, or drug candidates at scale and pace. Recursion initially employed their novel discovery platform for drug repurposing across models of rare genetic diseases and has recently expanded to enable target discovery and new chemical entity discovery, as well as to identify potential treatments in new indication areas like inflammation, immuno-oncology, infectious disease and aging.
The company has already generated more than 30 discovery programs across more than two dozen diseases, with its lead program expected to enter the clinic in 2018.