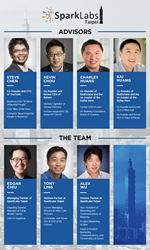 The first accelerator was launched in Seoul in 2012, then expanded to Songdo, South Korea with an IoT & Smart City accelerator, Beijing, and early next year a FinTech accelerator in Hong Kong.

Edgar Chiu has joined SparkLabs Taipei as the Managing Partner who will oversee its operations. He was previously the COO of Gogolook where he was responsible for developing global partnerships in Japan, Korea, the Middle East and Southeast Asia for the Whoscall app, a global caller ID service which accumulated more than 50 million downloads.
Gogolook was subsequently acquired by Naver (Korea’s leading Internet company with a US$24.4 billion market cap) in 2013, and Chiu took on the role as the founding General Manager at Camp Mobile Taiwan, Naver’s mobile group.

SparkLabs Taipei will target startup companies in IoT (Internet of Things), AI, VR/AR, mobile, fintech, healthcare, and others verticals. The mentorship-driven program will be three months in length and will provide funding, office space, a structure program and access to a network of entrepreneurs, venture capitalists, angel investors and executives from Silicon Valley and across the globe.

Chiu is joined by two Venture Partners, Alex Wu and Tony Ling, who are part-time partners who will be providing support to SparkLabs Taipei’s startups and sharing their experiences from Silicon Valley.
Wu is the Vice President of Marketing and Communications at Newsela, and was previously at Quora, Facebook and Obama for America. While at Facebook, he was a product marketer where he managed over $50 million in media placements, accelerated adoption of products like Facebook Pages and Facebook for Android, and led global marketing initiatives with Facebook’s mobile operator and device partners.
Ling is a former Managing Director at Silver Lake Partners, a technology-focused private equity firm with $39 billion under management. While at Silver Lake, Tony led investments across a range of technology sectors including internet, semiconductor and hardware-related companies.

Steve Chen, Co-founder and CTO of YouTube, and Kevin Chou, Co-founder and CEO of Kabam, join SparkLabs’ entry into Taiwan on their advisory board. Chen sold YouTube to Google for $1.65 billion and Chou recently sold Kabam to Netmarble, a South Korean online gaming company, for $800 million. Also joining are Charles and Kai Huang, the two brothers who sold Red Octane (Guitar Hero) to Activision.

By FinSMEs Published on August 1, 2012
fundingKoreaUSA