The round was led by Presidio Ventures with participation from Follow[the]Seed, Helion, Translink, and WTI.

Led by Amitabh Sinha, CEO, Workspot provides a virtual desktop infrastructure for enterprises across multiple verticals, including government, healthcare, and education to deliver apps, desktops, and data to mobile, Mac, and PC platforms.
The company, which has also announced partnerships with hyper-converged infrastructure vendors, including Nutanix, Hewlett Packard Enterprise, Scale Computing, and Atlantis Computing, connects users to all apps and data leveraging existing investments in the datacenter and without migrating data to the cloud. 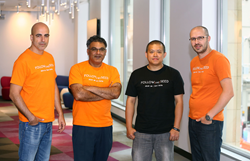 By FinSMEs Published on February 3, 2017
USA