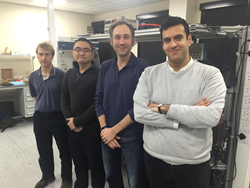 The company intends to use the funds to bring to market its first products.

Formed as a result of more than 10 years of research and development at Rainbow partner Science and Technology Facilities Council’s (SFTC), Rutherford Appleton Laboratory Space division, and led by Mohammed Belal, Business Development Director, Damien Weidmann, Chief Scientific Officer, Mirico is advancing new analytical instruments for trace gas analysis that deliver laboratory-standard performance in a highly compact, field deployable form factor. The company, which will initially focus on an instrument known as the Laser Isotope Ratiometer (LIR) developed to measure gases on Mars’s atmosphere, also has the rights to other technologies in laser spectroscopy, which have application in other large markets.