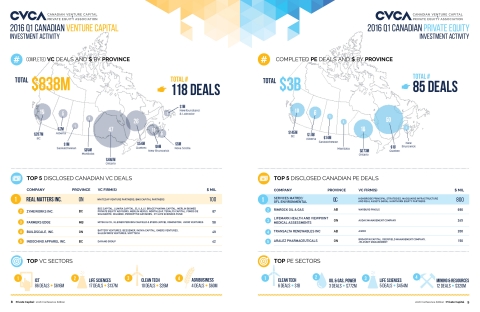 Record-breaking quarter for Canadian VC investment activity, which nearly doubles 2015 results in Q1, according to the report by CVCA.

Venture capital investment – at $838m – nearly doubled the amount in the same quarter of 2015 with the increase primarily driven by larger deals.
The top five disclosed deals in Q1 2016 accounted $336m, or 40% of the total disbursements. In comparison, the top five disclosed deals in Q1 2015 received approximately $100m, 24% of total disbursements of $419m.
The average deal size has grown to $7.1m, a rise from previous years where the average deal was in the $4 to $5m range.
Growth was driven by BC, Ontario and a large deal in Manitoba while Quebec’s activity went down ($54m versus $61m in Q1 2015).
Sectorially, Information and Communications Technology (ICT) is driving most of the growth.

The vc growth is balanced on the private equity side with decreased Private Equity disbursements. While the number of deals remained roughly the same (85 in 2016 versus 90 in 2015), the total investment value decreased from $7 billion in Q1 2015 to just under $3 billion in Q1 2016. This is primarily due to the slowdown in activity in the oil and gas sector.

On the exit side, activity has slowed overall, but particularly in the IPO market for both private equity and venture capital.