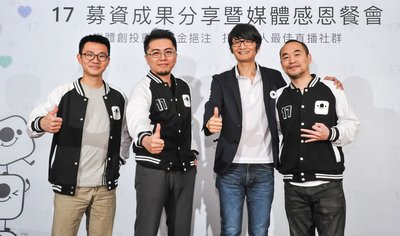 LeSports Innovation Fund made the investment.

The company plans to use the proceeds as well as the strategic partnership with LeSports to extend its reach to more dimensions of user-generated content while expanding the market in the Greater China region.

Led by Jeffery Huang, Akio Tanaka, and Popo Chen, 17 Media provides a live webcasting platform which features a multi-layered monitoring mechanism called SKYEYE that ensures broadcast content quality.
The social webcasting app has been actively expanding its market in the Chinese-speaking world and has rapidly gained international presence. In its first eight months of activity, its iOS and Android apps have had more than 10 million downloads.