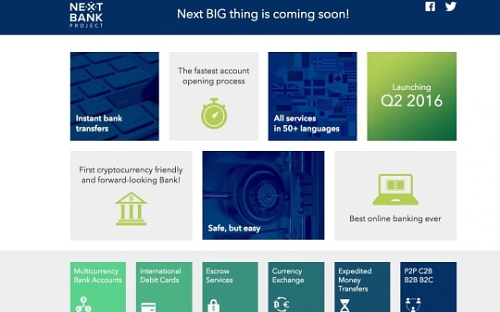 Backers included the founder of the company Dim Voloshinsky, who pledged $600k personally, and an unnamed angel investorm who committed $330k in the end of October.

Led by Voloshinsky (in Latvian Dmitrijs Volosinskis), who is also the director and owner of Instaglobal Limited which is the operator of Bitcoins123.com, NextBank will offer fiat currencies, cryptocurrencies and precious metals such as Bitcoin, Litecoin, gold, silver, platinum, palladium, GBP and USD on single multi- currency accounts.
The services will be offered in 50+ languages, with accounts in over 135 currencies including Bitcoin, Gold, USD and GBP. Debit Cards and an escrow service will also be offered.
Early registrations at http://nb.vu are opened with NextBank to launch operations during 2016.
The company plans to launch 7 regional offices worldwide in 2016: in the UK, France, Germany, Spain, China, Malaysia and Russia.