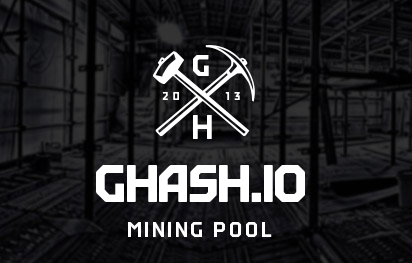 In the last two years, Bitcoin and other cryptocurrencies have attracted interest worldwide.

One of the most relevant activities is mining, which is the process of helping keep the network secure by approving transactions. It is an integral part of the entire system that ensures fairness while keeping the Bitcoin (and other cryptocurrency) network stable and secure.

In this environment, an ecosystem of operators is growing in every corner of the planet. Among them, CEX.IO, a London, UK-based startup, operates a cryptocurrency trade exchange (featured in another post here) and GHash.IO, a mining pool that allows users to mine Bitcoins with personal hardware or cloud-based mining power.

Launched in July 2013, GHash.IO is today one of the leading Bitcoin mining pool contributing about one-third of the overall hashing power out of the total. Continuously expanding and upgrading its capacities, the pool integrates the latest tech developments and trends to offer to its users state-of-the-art features.
It currently offers multiple options including:
– a cloud-based mining power, which is possible thanks to shared credentials between GHash.IO and CEX.IO Bitcoin Crypto Exchange. GHash.IO, which works as the pool in the mining section of CEX.IO, enables users to buy GH/s at CEX.IO that mine new coins until they own mining power while trading cryptocurrencies on CEX.IO;
– a Multipool Pro, which is an advanced scrypt mining feature that enables users to mine altcoins and switch the rewards to Bitcoins or Litecoins automatically. Alternative cryptocurrencies for mining, including Bitcoins, Litecoins, Dogecoin, Auroracoin, and FeatherCoin were recently made available;
– a merged mining option of BTC (Bitcoins) NMC (NameCoin), IXC (IXCoin), and DVC (DevCoin). Currently, users can exchange NameCoins for Bitcoins and Litecoins or simply reinvest them by purchasing more GH/s.
– real-time statistics with hash rate notifications.

To award miners, GHash.IO relies on a reward distribution system, which is based on Pay per last N shares (PPLNS), according to which the compensation is given out considering the last N shares, instead of looking at the number of shares.

EaseUS, The Backup Software for Laptops and PCs – Sponsored Post

Invest in Startups, a Real Opportunity to Consider