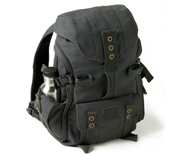 The company will use the funding to develop several new product ranges and continue its expansion into new markets.

Founded in 2009 by Jorrit and Nicky Forbes-Jorritsma, Millican creates premium bags and accessories for outdoor living and travel. The company, which sells through a network of distributors in Northern Europe and Japan, in the past 12 months, has also launched a number of collaborations with brands including menswear label Universal Works and Fujifilm’s X-Series premium cameras.