The round, which followed a $2.7m seed funding round in September 2012, was led by The Foundry Group with participation from American Family Insurance and existing investors.

The company plans to use the funds to further develop the product and expand market distribution into retail channels. 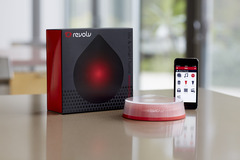 Led by Tim Enwall, CEO, Revolv provides a cloud-based software that connects with all of the specialized third-party home wireless products such as lights, locks, sensors, thermostats and streaming entertainment systems, via one iOS app.
The company began shipping to pre-order customers on November 12th 2013. The product can also be purchased direct from Revolv.com or from Amazon.com for $299.

Revolv was a TechStars 2012 graduate.