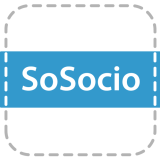 SoSocio, a Breukelen, the Netherlands provider of an application that allows users to create a photo book of facebook photos, raised $600k in funding.

The round was led by existing investor Brooklyn Ventures, with participation from other private investors.

The company intends to use the funds to expand the reach of its app, focusing on European countries including Germany, France, Italy, the U.K., and Spain.

founded in 2011 and led by CEO Wouter van den Berg, SoSocio allows users to quickly make books and cards of their facebook photos and the ones of their friends, including comments. After creating the book, users can order it. The company will deliver it home,