The company intends to use the proceeds from the investment, which follows previous investments totalling £1.7m ($2.7m), to expand globally over the coming year while further developing its entertainment analytics products.

Founded in 2008 by CEO Gregory Mead, Marie-Alicia Chang and Matthew Jeffery, and also led by CTO Jameel Syed, Semetric is the company behind Musicmetric, a digital music analytics platform, which works with record labels, managers, radio stations and music marketers to benchmark and compare artist performance in real time. Data covers activity on social media, mentions and sentiment on news and blogs, sales and file sharing activity on the BitTorrent network.
In October 2012, Musicmetric published the Digital Music Index, a report on the digital music landscape. In conjunction with the index, the company partnered with the BBC to develop an app enabling fans to find the artist with the highest BitTorrent downloads locally by UK postal areas to allow a greater understanding of how and where music is being consumed.
Musicmetric works with all major record labels and media outlets, such as EMI, MTV and the Guardian. 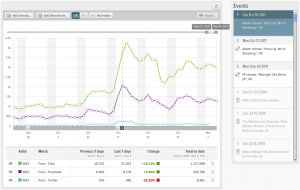 In conjunction with the funding, Jon Edington of Imperial Innovations will become a non-executive director of Semetric.

By FinSMEs Published on September 3, 2014
USA