The round was led by Australian listed property company The GPT Group (ASX:GPT), with participation from Shasta Ventures, Floodgate Fund and Greylock Capital. In conjunction with the deal, Sam Nickless of GPT joined Tod Francis of Shasta and Mike Maples of Floodgate on LiquidSpace’s board of directors. 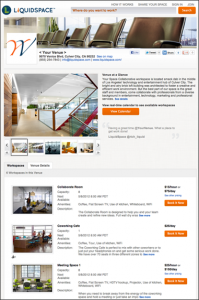 The company intends to use the new capital to expand their market development efforts and extend their product offerings.

Founded in 2010 by Mark Gilbreath, CEO, LiquidSpace provides corporations with a tool to enable their employees to find and book both private workplaces within their company’s portfolio, as well as external 3rd places including office business centers, hotels and coworking spaces.
The company currently operates a network of over 2000 private and public workspaces in over 250 cities nationwide.

Prior to the Series B, LiquidSpace had raised $1.3m in a seed round led by Reid Hoffman of the Greylock Discovery Fund and Mike Maples of FloodGate, followed in May 2011, by a $3.785m Series A round led by Shasta Ventures (read here).