Gramble, a The Hague, The Netherlands-based developer of a new charity-driven, mobile social-gaming network, has received $2.7m in its fourth overall seed funding round.

Backers include charity-lottery operator Novamedia and two other strategic investors.

The company, which plans to attract further investors in 2013, intends to use the capital to continue to develop its network iGramble. 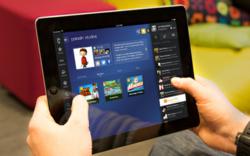 Led by Adam Palmer, founder, Gramble will launch its charity-driven, cross-platform online social gaming network in beta on December, 20, 2012, with downloadable apps to follow in the App Store and Google Play.
According to a written statement, Gramble will offer a progressive social gaming experience with a high level of social interaction. Players will be able to challenge friends, chat across games, share achievements, and follow all their social feeds live during game-play. Game progress is stored on online servers ports from device to device – from smartphones to tablets, PCs, and internet-enabled TVs.
A portion of all revenues generated on Gramble through player ad clicks, purchases, and activity with business partners will go to charities.
The startup is part of Gramble World BV.