Laffster, a Venice, CA-based startup that provides a comedic discovery and personalization platform for fun stuff online which including videos, articles, etc., has raised $750k in seed funding.

Co-founded by CEO Dan Altmann, CTO Geoff Plitt and CPO Eric Posen, and a graduate of MuckerLab, Laffster is building an online personalized comedic platform, in conjunction with humor-focused researchers at schools like Dartmouth and UC Boulder as well as humor-focused writers at publications like The New Yorker.
The company has also launched  “Mock the Vote”, a free iPhone mobile app that delivers humorous up-to-the-minute takes on political news, including content and curation from partners like the POLIPOP! Network at Maker Studios and The New Yorker’s Cartoon Editor as well as from satirical sources such as Jon Stewart, Stephen Colbert and The Onion. 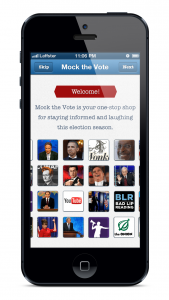 Laffster now intends to use the funding to build out future apps and develop technology to accelerate discovery and optimize content with partners on third-party platforms. It is hiring (http://www.laffster.com/jobs/)