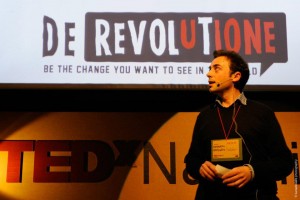 Following the funding in which DeRev.com raised €1.25m (read here), I asked Roberto Esposito, co-founder and CEO of the Naples, Italy-based startup, to tell us a bit more about his background, the company, its platform, the team, and the funding.
I couldn’t imagine to find such a young and talented man with a true explosion of vitality, dynamism, energy, in front of me.

FinSMEs: Hello, Roberto, thank you for joining us. First, can you tell us a bit more about you?
Roberto: Hello FinSMEs, thank you for inviting me. I’m an Italian blogger, an entrepreneur and an artist. I’m 26. In the past, I founded some startups to pay my studies in Aerospace Engeneering. Among them, I created a satirical blog, which I resold garnering a return of 200 times the initial investment six months following the launch. Having always worked at “zero budget”, I took my web projects off the ground creating unconventional marketing strategies, which obtained a very strong media and social impact through press and users, who spread the voice and amplified their visibility on the markets.
Thanks to the experience in web communications and psychology, during the last year I challenged Cityville, doubling its Guinness World Record for Facebook comments, I signed a contract with an Italian big publisher to publish my books. In addition, I was invited by Greenpeace International to participate in the “Unfriend Coal” campaign, which has pushed Facebook to move from coal to renewable energy. I also managed online communication and marketing activities for ‘America’s Cup Napoli 2012” and was a speaker at TEDx.
Since 2011, I have been developing DeRev, where I have sharpened any product aspect, worked on the business model, go-to-market and promotional strategies. In this way, during the latest months, I presented my idea to venture capitalists, succeeding in raising €1.25m in seed funding while the landing page reached 50.000 subscribers in Italy.

FinSMEs: What is it? How does it work?
Roberto: DeRev is a social platform that – as I love to say – allows users to transform their best ideas in revolutions in order to improve the world we live in. Its name derive from the Latin word “De Revolutione” and means “About the Revolution”.
The platform satisfies the growing need to power citizens and communities with tools to amplify ideas from the bottom, including a crowdfunding system, which is different from the existing platforms currently on the market, a tool to launch petitions and collect consensus to participate in an event and/or support an electoral campaign, a streaming audio/video model for private meetings and/or public debates, a system to collect and improve citizen proposals to politicians and public entities (e.g. from a resignation request to a proposal to pave a road, etc.). All of the features on the platform are then be re-modeled to ensure the maximum degree of efficiency for ideas in any field, including arts, culture, technology, research, business and startups, politics and participative democracy, activism, philanthropy, and fan clubs.
DeRev also offers special tools, such as the “Speaker’s Corner”, but I don’t want to riun the surprise!
I can only say that the platform allows you to create something innovative to solve a problem, improve a particular aspect of your life, meet people who share your own proposals to start collaborating and spread the voices of groups and associations, contribute to absorbing projects and sustain causes you believe in, make it available your skills and abilities and act as a real changing agent!

FinSMEs: When is DeRev.com scheduled to launch?
Roberto: In the second half of October 2012 in Italy.

FinSMEs: What’s your business model?
Roberto: Our business model is quite diversified but revenues are mainly based on crowdfunding, where we keep a commission (variable on options chosen by the user) for any received donation, on advertising, on an integrated system to promote projects, products and services maximizing the quality and the conversion rate, as well as on the sales of additional services, including the famous “Speaker’s Corner”.

FinSMEs: Could you introduce us the other team members?
Roberto: It’s a great pleasure. Co-founders, project managers and platform developers are Fulvio Sicurezza, 38, and Antonio Mottola, 37, who have been working side by side for several years. I met them in January 2012 when I began to present my startup, and I was looking for two talented programmers, who also believed in my idea and took the risk to realize it with me. Despite a particularly ambitious project and a crazy promise to take the project off the ground, Fulvio and Antonio trusted in me and resigned from their jobs to dedicate full-time to developing the platform. In addition, Simona Tortorella, a 28 year-old creative professional who has always offered her valuable contribution for each of my projects (books, startups, short films, guerrilla marketing campaigns) for several years and that this time, even not being a co-founder, believed in me and was the first to enter the DeRev team.

FinSMEs: Why did you start thinking about raising capital?
Roberto: In the past I always created “zero-budget” projects and startups, where the only investment was represented by the web domain and some documental expenses. Although their success and the invaluable experience I had in unconventional marketing, external resources always allow us to accelerate the growth of a startup and open the doors to bigger markets. DeRev was a very ambitious project and I always thought that an investment could be the first step forward a booming launch of the startup, in addition to a test to validate the idea and receive some feedback on my potential.

FinSMEs: Today, many tech companies try to raise venture capital, I know that this is not easy. What did you do to reach the target? Was it easy to close the deal?
Roberto: I don’t like failure attempts, especially in Italy where only a small number of venture capitalists operate and they know each other. For this reason, I have always tried to keep an excellent reputation and be regarded very high by people who work in the startup world. To this end, before presenting my idea publicly, I had worked hard (for one year) to finalize the product, marketing strategies, go-to market initiatives and the business model, while my co-founders had been developing the platform beta version. In this way, when I presented the DeRev pitch during the first startup events, I already knew what to do and was able to quickly reply to any criticism. In addition, when 50,000 Italian users subscribed to our landing page to have an account, I understood I could not fail: I personally contacted some prestigious venture capitalists, initially seeking €200k to build up my startup and, time by time, refusing offers from several incubators. The negotiations with Vertis SGR, which lasted “only” three months, were characterized by countless dealings on single clauses (even ten hour meetings and fifty emails a day, with terms revisited and modified a dozen times) of a hundred-page long contract.

FinSMEs: Who are the investors?
Roberto: After receiving five offers in eight months, in the end, I accepted the proposal from Vertis Venture, which I considered the most interesting one in terms both of capital and clauses. Vertis SGR, which provided €1.25m in funding (based on a very high premoney for a seed stage startup), was then joined by prominent angel investors such as Giulio Valiante (Jobrapido, Buongiorno Vitaminic, Saldiprivati) and Michele Casucci (Lycos Italia, Certilogo, Jobrapido), who will help us accelerate our growth and become market leaders in Italy and abroad.

FinSMEs: How are you using the capital?
Roberto: Firstly, I rented a space in a historic building in Naples (Italy) where, under refined frescoes of 1800, we can meet and work on the platform as a team. Secondly, we hired two web developers, a web designer and a communications expert, who focus on the development of the platform. Finally, a portion of the investment (approximately 50%) will be used for guerrilla marketing and unconventional advertising campaigns to be conducted during the next months.