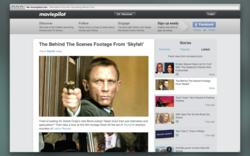 Moviepilot.com, a Berlin, Germany-based movie recommendation and discovery platform, has completed its $7m Series B financing.

The round was led by DFJ Esprit, with participation from T-Venture, Grazia Equity and VC Fund Creative Industries Berlin.

Founded in 2007 by filmmakers CEO Tobi Bauckhage and CPO Jon Handschin and CTO Benjamin Krause and launched in October 2011, Moviepilot.com allows movie fans to discover upcoming projects and keep track of their development from pre-announcement rumours and speculation right through to theatrical release.
By giving fans a place to gather often long before official homepages are created, the platform helps major movie studios identify and engage a movie’s online fanbase, and better market their projects to their core audience.
To date, the company has partnered with studios such as Twentieth Century Fox, Universal, Disney and Paramount in the US and worldwide.
Moviepilot.com currently employs over 50 people across offices in Berlin, London and Los Angeles