The company intends to use the capital to build out the team and product, and expand its merchant base.

Founded at the end of 2010 by by Oxford graduates Hiroki Takeuchi, Tom Blomfield and Matt Robinson, GoCardless aims to make it easier to accept bank payments online. It has developed a REST API that makes it simple for merchants to integrate with GoCardless and start taking flexible and recurring payments immediately without the need for a merchant bank account bypassing the card network. For consumers, the solution aims to make it easy to make payments. After the initial sign up, users can authorize future payments anywhere GoCardless is offered with just one click. The company has also created a dashboard where users can easily manage all of their payments, giving them more control over their online spending. 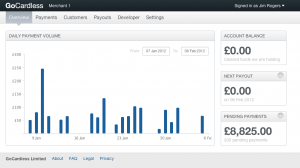 Since launching a beta product in late 2011, GoCardless has already integrated with over 300 merchants. Its team participated in the YCombinator summer program in Silicon Valley in 2011.