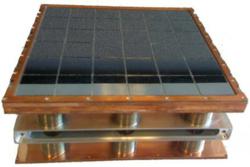 MTPV, a Austin, TX-based clean energy semiconductor chip company, raised $6.5m in an initial closing of its Series B funding.

The round was led by existing investor Spinnaker Capital, with participation from Applied Ventures, Massachusetts Clean Energy Center and Ensys Capital.

The company, which expects to complete the financing by selling an additional $2m in equity within the next few months, intends to use the funds to to expand its current beta testing of its first commercial prototypes and scale its manufacturing capabilities.

Based on research at MIT and led by CEO and founder Bob DiMatteo, MTPV creates semiconductor chips designed to convert heat directly into electricity.