The company intends to use the funds, whose amount remained undisclosed, to further expand its member base, increase partnerships to offer deals more frequently and grow to become a comprehensive, one-stop source for dog owners for both merchandise and content.

Launched in February 2011, doggyloot runs three to four deals each week on everything from dog toys and treats to grooming supplies and accessories, at a 50 percent discount or higher.
The company was internally incubated in Sandbox Industries’ offices in Chicago. 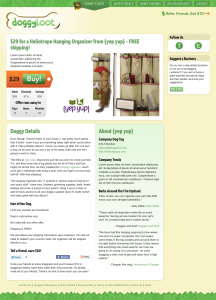