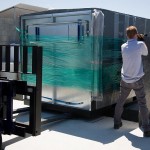 The company provides a new class of distributed power generator, producing clean and affordable electricity at the customer site. Bloom’s Energy Server™, which is built with patented solid oxide fuel cell technology, is used by companies such as eBay, Walmart, Adobe, and Google.

Founded in 2001, Bloom Energy is led by Principal Co-founder and CEO KR Sridhar, Ph.D., and backed by NEA and Kleiner Perkins Caufield & Byers.