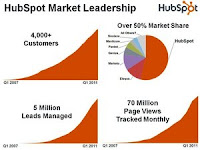 HubSpot’s marketing software is currently used by over 4,000 businesses in 31 countries to get found by more prospects, convert them into leads and sales, and analyze the entire marketing process.
Applications include website management, blogging, search engine optimization, lead management, marketing analytics, email marketing, landing pages, and social media monitoring.
HubSpot is also the developer of the popular website analysis tool, WebsiteGrader.com, which has over 3 million users.
Founded in 2006 by CEO Brian Halligan, and CTO Dharmesh Shah, the company had already raised $33m in previous rounds including:
– a $16m Series C raised in October 2009,
– a $12m Series B raised in May 2008, and
– a $5m Series A raised in July 2007.
FinSMEs
08/03/2011