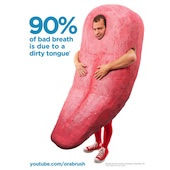 The company intends to use the funds to maximize its online brand and expand retail partnerships and distribution channels worldwide.
Since 2009, Orabrush has leveraged social and traditional media to commercialize its products on line and through leading stores, including  major retailers in the United States, Japan and United Kingdom.
Created in 2000 by Dr. Robert Wagstaff and led by president and CEO Jeff Davis, Orabrush has launched into 114 countries in the past year and is rapidly expanding to retail stores.
FinSMEs
15/02/2011