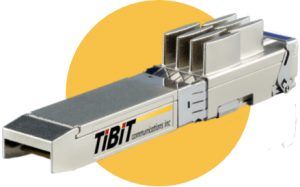 The company intends to use the funds for market expansion as it prepares to commercially deploy its flagship product, the Tibit MicroPlug™ OLT [Optical Line Terminal], and to accelerate R&D work on additional pluggable PON innovations planned for release later this year.

Founded in 2014 and led by Richard Stanfield, CEO and President, Tibit has developed MicroPlug™ OLT, a complete network access device for 10-Gigabit optical networking that reduces the amount of application-specific hardware needed for network deployments.
The standard-based SFP+form factor allows their device to plug into almost any 10G switch port, expanding architecture options for carriers. All this is enabled by the Tibit bridge ASIC, a small and low power 10G OLT chipset, which supports a rich feature set across both ITU-T and IEEE 10G PON standards.