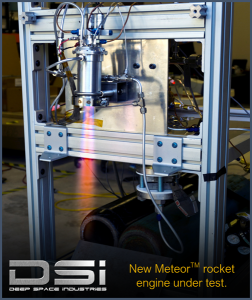 The company intends to use the funds to develop its rocket engine and continue the ongoing development of its deep space exploration platform scheduled for launch in 2020.

Led by CEO Bill Miller, Deep Space Industries is a space technology company that is developing a suite of technologies including MeteorTM, a new launch-safe bi-propellant rocket engine to be released later in 2018, and the XplorerTM spacecraft, a deep space exploration platform scheduled for launch in 2020.
The company, which also has offices in Florida and Luxembourg, recently announced two significant contracts for its current water-based CometTM propulsion systems for small satellites.