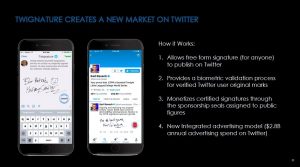 lettrs, Inc., the NYC-based company behind Twignature, a media and e-signatures platform, raised $3M in funding.

According to a written note, the half of the fund came from veterans of the Armed Forces.

lettrs also announced that Dr. Harvey W. Schiller, one of the most respected leaders in sports, media and entertainment, and a former Air Force General, has joined the company as Chairman.

Led by Drew Bartkiewicz, Founder and CEO, lettrs provides Twignature, an app that activates an immediate digital marketplace for authenticated, distributed and sponsored signatures across the Twitter network marginalizing fake signatures, “troll” accounts, and those manufactured tweets of less social value.
The app, now available on iTunes, leverages a decentralized service that uses smartphone biometrics and blockchain distribution principles to activate a unique number, ledger and seal of authenticity for signed Tweets, including signature location, device, and whether the original autograph was associated with a major brand.