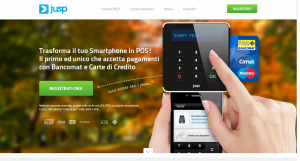 The round was co-led by Principia, which made the investment via Principia II, and Vertis Venture, with participation from Bruno Spadoni, Giulio Valiante and Simone Ranucci Brandimarte.

The company intends to use the capital to launch in Italy soon and expand in other European countries subsequently.

Founded in November 2011 by COO Giuseppe Saponaro and CTO Jacopo Vanetti, Jusp provides a card reader that can connect via a mini jack audio lead to any smart device. Based on European standards concerning electronic money transactions, it works by reading the chips on cards. The application, which can be downloaded free of charge, receives data and manages the transaction process.
Jusp, which is available for IOS and Android with Windows Mobile and Blackberry to come, accepts all major credit circuits including Visa, Mastercard, American Express, the relating prepaid cards, the international V-Pay debit circuits, Visa Electron, Maestro/Cirrus, and the Italian Pagobancomat debit circuit.
Following the investment, beyond the founders, the company will be also led by Stefano Calderano (CEO) and Paolo Guida (Jusp CFO), who had previously invested €500k, as well as Roberto Mazzei, President of Principia Sgr, who will become President of Jusp.
The company currently employs 12 people.