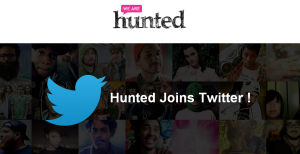 We Are Hunted, a San Francisco-CA-based music discovery startup, was acquired by Twitter.

Following the deal, the company will shut down wearehunted.com, as well as the existing accounts.

Founded in 2007 in Brisbane, Australia and led by Stephen Phillips, Richard Slatter, Michael Doherty, Adrian McLean, Genevieve Robey and Ben Novakovic, We Are Hunted is a music startup that tracks the most popular songs across the Internet and social media.
Initially backed by Graeme Wood, the company didn’t say has not disclosed what they are working on at Twitter.